How the Use of Extended DISC Identified Insecurity Within a Team

This case study does not have a happy ending for the consultant involved because she found herself in a “no win” situation. The organisation involved has approximately 3000 employeesand for this reason alone, had significant HR challenges. 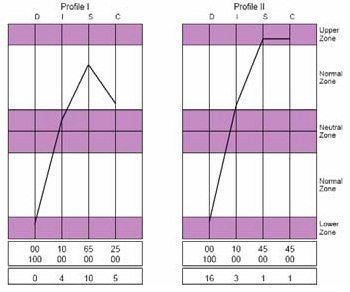 The company engaged a new HR consultant (let’s
call her Betty) who is an Extended DISC advocate and a very experienced and knowledgeable consultant. She replaced an HR manager who had been with the company for a lengthy period and who had obviously avoided making any decisions or taking any steps that might “rock the boat”! His profiles are opposite.

Betty recognised the necessity to make some important and probably unpopular changes to procedures which included introducing a new appraisal system that she instructed every manager in the organisation to adopt with his or her subordinates. Part of the appraisal system involved obtaining an Extended DISC Personal Analysis Report supported by an appraisal guide on how to use the information. Betty (whose profiles are opposite) faced a lot of resistance amongst some of the regional directors who refused to send the instructions to their managers claiming that the whole process was “unnecessary and something that the managers already did in their own way”. 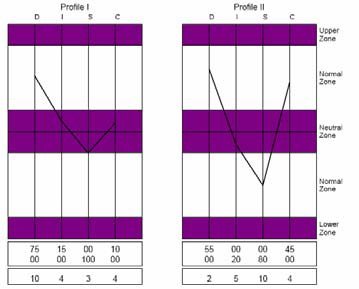 However, Betty decided not to listen to those divisional managers and conducted a series of training programmes for all managers explaining how the appraisal system she had designed could improve communication and effectiveness at
team level.

As part of the process in analysing the results of the Extended DISC Personal Analysis Reports, she produced Extended DISC Team Analysis Reports with the objective of launching a team development programme in the organisation. It was at this stage that she noticed a systematic change in the Team Profiles with C ascending in most of them. (See below). Betty decided to find out why this indicator was so prevalent in many of the teams. 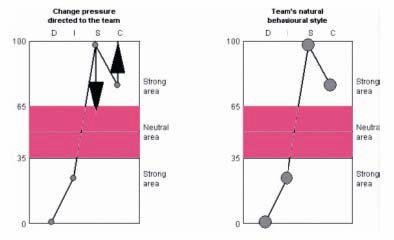 Typically, if C ascends in Team Profile I (in the Extended DISC Team Analysis Report), it is a sign of cautiousness within the team. The team feels the need to be
very careful in what it does and there is generally a feeling of “better not to do
nothing than take a risk of doing something wrong” within the team. This is similar to a forced reverse shift in Profile I in an individual’s Personal Analysis Report.

After a long series of interviews she began to realise that there was an unofficial group who in reality managed the organisation. This consisted of the CEO and three of his closest regional directors, all of whom had been in the company for at least 20 years!

They had created an atmosphere of fear in the lower management ranks who were admonished for mistakes and where the promotion system was based on one-to-one relationships and not business performance.

Unfortunately for Betty this became a “no win” situation. She fought against the systems she believed to be inadequate and inefficient but after three long years she was summonsed by the CEO who simply told her that he had information about her that would make her life very difficult in the organisation if she continued with her programme and he advised her to resign.

Betty never asked the CEO what that information was, and finally realised that she had no option but to resign. We suspect there are many such situations prevalent in other organisations around the world, and the CEO’s attitude and the threat of the use of the alleged “information” is typical of the management style of many organisations that are governed in an autocratic style.

The company continues to operate although we suspect that in this economic environment it will struggle. Unless team members are encouraged to think outside the square and promotion is based on competency and interpersonal skills, then the result is likely to be similar to many of the large organisations that have
recently failed, – notably in the USA.

It should always be remembered that only 15% of job success is based on technical competentcy and 85% is related to interpersonal skills. This is where Extended DISC methodology is so successful.