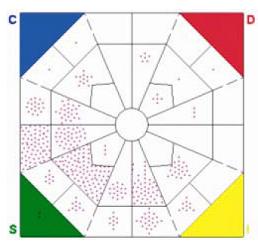 ABC Limited is a company that operated as a wholesaler importing goods and selling them mainly to “not for profit” organisations.

The company employed 300 people, most of whom worked in administration, in warehouses and in logistics. Some were working in sales, but the sales division was more involved in customer support than in the search for new accounts.

The corporate culture could have been described as being harmonious, stable, peaceful, slow-paced and centrally managed and a “Shotgun Map” taken from their Team Analysis Report generated at the time is shown opposite.

After a change in the company’s ownership, the new owners wanted the company to enter into a more competitive field of selling the goods to manufacturers, retailers and other profit-oriented organisations. 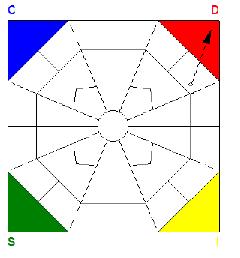 The first step was to nominate a new CEO. His profile was “DI” as shown on the Extended DISC Diamond opposite. You will notice that his adjusted behavioural style was 100% “D” as he felt he had to take a competitive and direct approach to achieve the objectives formulated by the directors.

After redesigning the organisational chart, he selected a new senior management team with the right experience and attitude. Compared to the previous function-based organisation chart, the new chart was based on customer types so that the whole process from procurement to after sales service was handled by the same team.

He next profiled the other managerial positions using the Extended DISC Job Analysis. Based on the “Name Map” of the original Extended DISC Team Analysis Report, he selected potential candidates for interview and review.

The selected managers were told how many employees they would be allocated and they were given a free hand to select the people from the existing staff (with the CEO making the final decision). The people not selected were not offered new employment contracts.

The next step in the process was to make the teams as self-managing as possible. To support this process the Extended DISC Team Analysis Report was printed for each team. Each team also participated in a team training programme in which one aspect was learning to understand the team’s strength and style. The process was supported by the Extended DISC Personal Analysis 360 Tool and the related training programme.

The senior and lower management participated in every session.

In addition to the team training sessions, a special sales training programme was organised where each participant was introduced to his/her natural sales style (from the Extended DISC Personal Analysis Report’s specific Sales Style Report). They were also required to complete a personal development plan to become as effective in sales or customer support as possible.

The physical layout of the office was fully redesigned so that the walls between the one-person offices were removed and new, larger team rooms were built.

It was soon realised that not everyone in the old organisation could adjust to the new culture. During the three years of the project, some of them found a new position in an organisation with a culture closer to what they had been used to. To replace the empty vacancies, the Team Name Maps were used to find out what types of traits the team would need most.

The outcome was a huge success. As a result of the process, the company now employs 100 people, it has tripled its revenues, and is profitable even in this difficult current environment.

The mood and spirit in the company compared to what it was three years earlier is much more active, communicative and participating. Most of the people working today for the organisation also worked there three years ago, but a number have been replaced by new people. 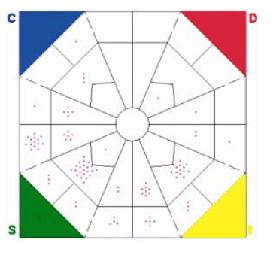 In addition, the old traditions that had stagnated the organisation have been broken, the concept of self-managing teams has been introduced to the organisation and many other small changes have taken place that have all contributed to a significant change in organisational culture and a successful change to the new desired direction.

The CEO was well aware of the findings of independent studies conducted by Harvard University, the Carnegie Foundation and Stanford University where it was found that 15% of job success is based on technical competency and 85% is related to interpersonal skills. He used this knowledge with great success utilising Extended DISC methodology in bring about the desired changes.