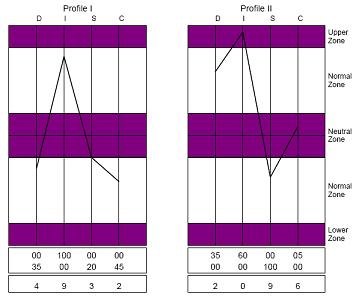 How the use of Extended DISC Personal Analysis Reports helps in staff retention
John owns and manages a successful car franchise. During these uncertain times, he has managed to retain his market share and although the dealership is not recording the same level of sales it recorded in January and February 2008, the firm is still more than holding its own in a very competitive environment and is operating in profit.

We have been impressed with the relationship John has with his staff. He has used Extended DISC for recruitment over some two years and has all of the team on his in-house EDPS (Extended DISC Professional Software) database.

He therefore knows what motivates each team member, what they try to avoid, and their clear natural strengths amongst other things. If he feels that any of his team are losing motivation, or if he can pick a change in his or her behaviour and it is some period of time since they completed a Personal Analysis Report, he asks them to obtain another report.

That way he can detect the reason for the change and can address the problem. He understands the fundamental importance of holding on to his talent, knowing that tempting staff to stay in difficult times is not all about money.

The company has four separate divisions and the team are working longer hours in an industry where staff changes are frequent. John understands the challenges the current economic climate creates and he tells us that he has felt the need to increase his focus on staff retention. 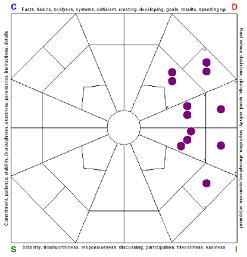 John also knows and understands behavioural styles very well indeed. He knows exactly the styles of the best performers and has produced a Team Analysis Report of the top sales staff taken over a two year period to show exactly where they fit on the Extended DISC Diamond. This behavioural map (as John prefers to call it) shows that the top sales people all fell within a relatively close area, as demonstrated by the Extended DISC Diamond opposite.

In discussions we have had with John over the period he has been using Extended DISC, it is clear to us that his knowledge of the methodology was very good. In a recent conversation with him, I expected him to tell me that he was therefore focusing on recruiting replacement staff who demonstrated the same behavioural traits as those shown on the “top performers” behavioural map, so his response was unexpected!

He pointed out that over the previous couple of years when the market was buoyant, the top performers in the industry tended to become well known to competitors and they would move on for better pay. They were difficult to retain, and this meant for John, continual recruitment and training costs.

For this reason, John had decided to seek salespeople who fell into a different area on the “behavioural map”. He had completed a second Team Analysis Report over the same period showing those sales staff who had performed quite satisfactorily but had remained loyal and stayed with the firm for longer periods. He has managed to reduce his employee turnover by some 60% by employing replacement staff who fell into this “long-term” segment shown on the Extended DISC Diamond opposite.

Have you identified what employee behaviours create sustainable, long-term success for your organisation? If not, have you considered the cost of employee turnover? Extended DISC helps in understanding your individual team members, but when used in this type of approach, reduces training and employment costs.